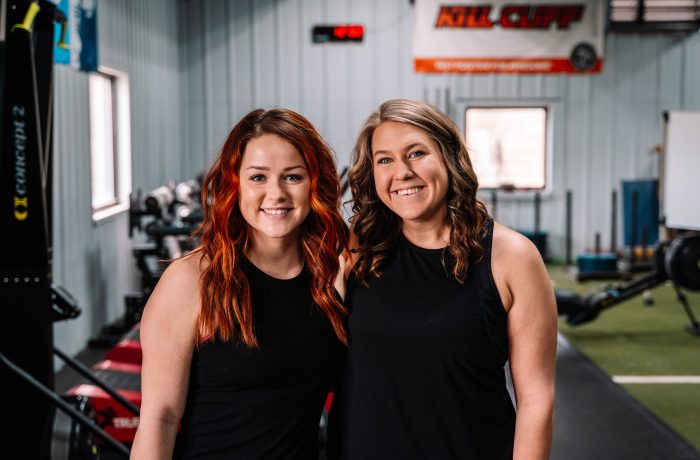 We won’t sugarcoat it. CrossFit can be intimidating, especially for newcomers. For some, any gym is intimidating but a CrossFit gym (a.k.a. box) can be especially tough because there are friends and clicks that can make you feel like the lost kid at lunch with nowhere to sit all over again.

It’s not intentional. CrossFit is a community-based fitness program so it’s natural to build deep friendships at your chosen box. It’s easy to get wrapped up in it and assume everyone else has their place of belonging, too.

After two years, Chrissy Goecke, who came in on our annual 21 days for $21 program, hadn’t found her core group of friends yet. Because of it, she was coming to class minimally and just not feeling motivated.

Along came Kara Cosgrove who had recently joined OC3 after a couple of years of kickboxing and CrossFitting out of a friend’s garage. She had the knowledge and know-how but not the network. She started in December of 2021 then got sick, the holidays hit and she just wasn’t finding her groove.

One day in the ladies’ room, she noticed Chrissy taking photos for our annual Total Nutrition Takeover (TNT) challenge and she wanted in. So, she found the courage to ask about it and she asked just in time because it was Day 1 of the 7-week challenge and Colin Cartee, Owner/Operator, approved her last-minute request!

They joined the same TNT team with Coach Kisha and started working out together five days a week.

It didn’t stop there though.

Chrissy and Kara started texting every day and hanging out on the weekends. In a very short period of time (about four months), they ended up forming a bond so strong that most people thought they’d been friends for years. Their significant others have also become friends. Kara said, “The guys were HUGE supporters of our goals, which helped a ton.”

Think about that. One simple conversation in the OC3 ladies’ room led Kara to join Chrissy for some accessory work and the two have been inseparable ever since.

But there was something more that bonded these young ladies so deeply. Chrissy said, “I just knew Kara had gone through something similar to me but I didn’t know what.” It was just recently that the girls shared their struggles around food with each other, which only strengthened their bond.

As a sophomore in high school, Chrissy spent 30 days at a residential treatment center in Wisconsin and then three months in an outpatient program in Peoria in order to heal her bulimia.

“It’s never a linear process and it wasn’t easy. I felt better going into my junior year after having learned some helpful coping skills but then going off to college, I gained the freshman 15 and started to not care again,” Chrissy said. She eventually found yoga, running and then CrossFit thanks to her sister, Lizz Simms, a long-standing member of CrossFit OC3 and another success story (both 21 days for $21 and TNT).

“I asked Lizz to force me to sign up for the TNT,” Chrissy said. “It’s not that I didn’t know how to lose weight. Quite the opposite, actually. My bulimia started at 14 and I knew exactly how to lose weight quickly…the unhealthy way. But I knew I didn’t want to go back. I wanted to do it the right way this time.”

Similarly, Kara has always struggled with being consistent with her diet. One week, it’s obsessing over her calories and the next, it’s binge eating. It’s a constant rollercoaster with her eating decisions. Both TNT and Chrissy have helped hold her accountable in order to remain on a healthy diet and turn it into her newfound lifestyle.

“Some days are more challenging than others when it comes to body image. But when I eat well, I feel well. I found more confidence in myself through TNT because of the foods I was enjoying,” Kara said.

When the two decided to do TNT, they knew they had to do it in a way that worked for them. That meant no extreme dieting, crazy calorie cuts or boiled chicken. Anything else would have meant a downward spiral for the girls and they didn’t want to risk retreating back to their old habits.

They kept their promise to themselves through the end and didn’t restrict food or water during the last week in order to have the most cut after-photos. “We still ate the food we loved but we gave up drinking alcohol and we were smart about our meal choices. I never knew Laughing Cow cheese with green beans and everything but the bagel seasoning was a thing,” Chrissy said of Kara’s favorite meal. They were at the gym at least five days a week and usually for more than two hours.

They still track their eating to keep things in check but TNT helped them to know what a serving of cottage cheese or ground turkey looks like, which allows for more flexibility in their day-to-day life.

Probably the coolest part of this story is how these two humans saved each other. “I got a text from Kara about two weeks after the day we started our instant friendship. She told me that the day I invited her to do TNT and accessory work with me was the day she was going to quit CrossFit. She’d come to the conclusion that group fitness just wasn’t for her,” recalls Chrissy.

They both attribute their successes to the other, saying they would never be where they are now without the bond of their new friendship. “It’s so important in life to find your person, the one who gets you on another level. Friends who push you when you need it and support/comfort you when you need it most,” said Chrissy.

We couldn’t be happier for these girls and their newfound confidence and life lessons. When you do the hard work, you get results!

SIGN UP HERE before 4/25! Limited to the first 15 participants. Only a few spots left!

If you or someone you know is struggling with an eating disorder, please call the National Eating Disorders Association (NEDA) at (800) 931-2237.