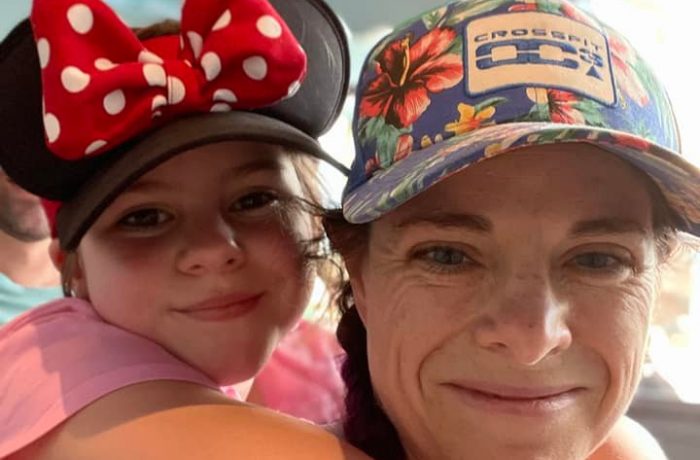 Check all that apply:

Michelle Hankins has had quite a journey with health and fitness. She went from wanting to give up completely to now being a certified trainer who is down 85 pounds in total and constantly crushing goals!

“I’ve always enjoyed cooking and have been planning meals for 18 years. When I was newly married at 18 years young, and even well into my marriage, home cooking was usually done on a tight budget. Chili fries or pasta with cream sauce were staples,” she recalls. “My ‘meals’ were planned around the starch, so I just needed to pick my poison (interesting pun, eh?). I served pasta, bread, potatoes or rice every night, and nutrition was never even a thought,” she explained.

Already overweight, being a military wife with frequent moves and having a baby added to Michelle’s stress and weight gain. “There is a reason it’s called ‘comfort food.’ We moved only three weeks after having our baby and we were already far away from family living in Germany. The food was so good and the wine was everywhere!”

Eventually, a new country and a new baby pushed her to try something different. As she started biking and walking two hours per day, four days per week, Michelle realized that she enjoyed being active. This was the inspiration she needed to become more intentional about movement and working out! But she quickly became frustrated with the lack of physical changes. Her ‘aha moment’ was in the spring of 2016 when she stepped on the scale and tipped 227 pounds (size 18). She knew then that something was missing.

Her first thought: Maybe I should just go for it and get super fat, like really fat.

Her second thought: Maybe I’ll try functional fitness on base first and see how it goes.

Before taking any ‘drastic measures,’ Michelle decided to enjoy a family vacation first. Going to Hungary and Budapest meant walking six to seven hours per day so Michelle assumed some of that weight would come right off.

“When we returned home, I stepped on the scale and was mortified yet again. I didn’t lose weight on vacation as I had in the past,” she said. She couldn’t figure out what she was doing wrong and it only confirmed the thought that she was missing a crucial piece.

“I’d heard about CrossFit through a friend but I’m cheap and CrossFit is not. There was a woman on post teaching functional fitness for free so I started there,” she said. Hearing Michelle’s frustration, her new coach encouraged her to take a closer look at her diet and eating habits. “I started tracking everything I ate in MyFitnessPal. I didn’t want to completely omit ‘bad’ foods so I adopted the ‘crowding out’ approach which is where you still have the pizza, for example, but start with a salad to crowd out the less healthy choices with healthier food. If I was having dessert after dinner, I would eat a heavier protein meal so that there was less room for dessert,” she said.

Moving big loads and paying attention to food intake were starting to work for Michelle. They were seemingly the missing puzzle piece but she didn’t stop there.

When her daughter, Beatrix, went on summer break, Michelle was forced to make a temporary change that led her further down the fitness path. The gym on base didn’t have child care so she reluctantly joined the local CrossFit gym and ended up loving it. “When Beatrix went back to school, I attempted to go back to my ‘financially responsible’ gym and it just made me sad, which is not at all a reflection on Coach Kate who was exactly what I needed when I needed it. I was back at CrossFit rather quickly and I’ve never looked back since!” Luckily, her husband, David, was supportive.

In January 2017, Michelle got even more intentional and started setting goals. The first was to get one strict pullup. “I worked at it every single day using banded pull-ups, hollow holds and everything I could to gain the strength needed to lift my own body weight and get my chin above that bar!” Her goal was to get at least one pull-up by the time they were scheduled to leave Germany on July 2. On June 22, she achieved her goal!

“My gym crew was there to witness my first pull-up and I was so happy that I cried. It was a huge feeling of accomplishment!”

By that point, Michelle had lost 50 pounds. Her next goal was kipping pullups so she could do the Hero WOD Murph without having to scale. She ended up doing it in a partitioned format which wasn’t good enough for her, so the following year she did it as prescribed (Rx) and PR’d it!

“Always having a new goal to work toward keeps me motivated. I need something to strive and push for!”

When she and her family moved to Davenport, Iowa in 2019, Michelle tried out a few local gyms. “The programming was so good that I knew I was going to end up at CrossFit OC3, even if it meant driving across town. Joining such an elite gym was quite humbling because I had been one of the better athletes at my previous box but that was NOT the case here. I wasn’t able to do the workouts as prescribed at first, which really pushed me. One of the coaches showed me how to be more efficient at my dumbbell snatches right out of the gate and that is exactly what I needed!” she exclaimed.

Michelle is also a big fan of our year-long challenge. “Just when I thought I couldn’t, I PRd my snatch,” Michelle remembered. Not only did she complete the entire 12-month challenge (1 of only 5 people to do so) but she WON IT!

Then, in 2022, Michelle came in 2nd in our annual TNT competition after just having come back from surgery. Her advice to anyone doing tough challenges is not to have an all-or-nothing mentality, “Think along the lines of ‘if today wasn’t perfect, know that tomorrow will be better.’”

Michelle is so glad she chose health over dis-ease. “I felt uncomfortable in my body, it was hard to move and chase my daughter without getting tired. I just didn’t feel great. Now I can carry her around Walt Disney World® at 75 pounds and I’m stronger than my husband (to be fair, he doesn’t lift (I’ve tried) so it’s easy to outlift him)!”

Stronger. Than. Her. Husband. HELLO!

Starting is the hard part. That is a fact. Was Michelle the first one done in her workouts when she started? Nope, she was dead last. But she just kept going, one day at a time. “If I can do it, you can do it, and, guess what? I’m not last anymore!” she said.

We have been totally impressed with Michelle who now has her CrossFit L1 and her USA Weightlifting L1. She turned 40 this year, is healthier than ever and plans to crush her next goal (handstand walks).

“Michelle has demonstrated unreal motivation and she has an amazing story that only continues! I can’t wait to see what she does next. We are so proud of her and glad to have her here!”