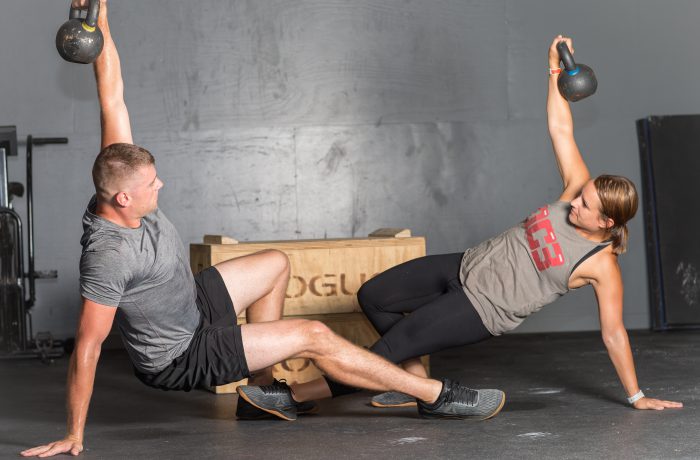 Living Their Best Lives or Living It Up?

Once upon a time, this young couple was living their best lives. They were cute, in love, having fun, partying and eating all the things. They would occasionally hit the Y at half speed and call it a day. Their nutrition and workout routine was just so monotonous and they had better things to do as young twenty-somethings.

What they didn’t realize is how crappy they actually felt while living their “best lives.” They were both experiencing low energy and stamina. Murph, a Davenport police officer, knew something would have to change for the betterment of his career. Lizz was struggling to get through her days of accounting and auditing. Their mindset was that they could work off a poor diet, just as they did in high school and college back when they were playing sports. But, deep down, they knew something just wasn’t right!

How to Get Fit?

When Lizz’s best friend, Sarah (who’d been doing CrossFit for years) joined OC3 she didn’t waste much time convincing Lizz to join. With our annual 21 days for $21 sale going on, her timing was perfect and Lizz decided to give it a try.

Needless to say, she went home and puked after her first workout (you can ask her what other factors may or may not have been involved there but we’ll give you a hint – she was nominated for the drunkest golfer at our annual golf outing in July!). She wasn’t sure if she could do it but her friends wouldn’t let her give up. A week later, she was hooked for life!

Murph, who’d always worked out, had had CrossFit in the back of his mind solely for the purpose of being more fit than the people he’s administering the law to. He’d seen amazing results from his friends but just needed that push. Two months after Lizz joined, Murph was in!

Nutrition was simply not on either of their radars. They’d tried keto and paleo and felt they were doing okay but realized they needed a complete lifestyle overhaul, not just a temporary bandaid. Being crazy competitive, they both decided to sign up for the Total Nutrition Takeover (TNT) challenge that we hold for seven weeks starting every January (part 2 goes for 6 months and it’s truly meant to last a lifetime). Lizz felt so confident about it that she told Colin she was going to win and he told her no [explitive]-ing way!

That was alllll the motivation Lizz needed. Taking her macros very seriously, giving up booze completely and often doing two-a-day workouts, she was going to win this thing! After having learned that carbs were “bad,” Lizz said, “The hardest part of TNT was putting all of my faith into the macros.” She eventually learned to trust the process and, because of it, she reaped the rewards.

For Murph, macros were his love language. He secretly told us that he wants to marry his macros. Why? It was a nice, tidy package of parameters that simplified his eating habits into a perfect routine. “I knew what I needed to eat and when to stop eating. Seven weeks doesn’t give much room for error so the accountability was huge because you don’t want to be the guy on the team logging excess macros so I just stopped eating when I hit my numbers,” he said. He felt the impact in his workouts and recovery within the first week and was able to work out every day (sometimes two-a-day) with no issues! Prior to TNT, he was drained, had low energy and extremely sore muscles.

Both Lizz and Murph were very disciplined throughout the entire TNT. No cheats, no booze. Luckily, when they went out, their friends were very supportive. They could eat whatever they wanted but there was a lot of rice, veggies, fruits and chicken.

How Does It All Fit into Everyday Life Now?

This couple, who were previously eating out and avoiding the kitchen except to reheat leftovers, now cooks regularly. They’ve learned so much about food (and all of the additives in it) and like to get creative! It has saved them time and money and, with opposite work schedules, afforded them more quality time together. Now, they’ve found their sweet spot which is generally grilling a bunch of protein at the beginning of the week and using it in various ways throughout the week. They got so tired of chicken breast meat during the challenge and praise the day they found chicken thighs!

“Mustard and chicken thighs became our friend!” said the couple. What used to be a twice-a-week habit, they now have Whitey’s Ice Cream maybe once a month. Lizz used to gulp 36 ounces of coffee with heavy cream daily and now drinks 8 ounces with half-and-half at most. She just doesn’t need it anymore to sustain her energy levels because she’s getting what she needs from food.

What Were Their Results?

Hello, twinsies! Both lost 17 pounds during the challenge and are down 30 pounds total (and counting) since they started at CrossFit OC3. Lizz had to buy new jeans for the TNT after-party and they were still too big!!

Lizz worked with Coach Nic for three months after the challenge and felt so confident with her new knowledge. She also attributes some of her success to Coach Taylor’s extra WODs with an emphasis on cardio work and Coach Joe P.’s attention to skill work. Murph appreciates Coach Colin’s style of motivation and says, “When he’s in the room, you know you need to step it up and work your ass off because he’s going to let you know if you don’t. His presence and programming are awesome!” They did the work at home with their macros but the other half of their success was coming in and working their asses off with the OC3 family!

Not only have they impacted their own lives, but Murph’s sister, Hanna, has since joined CrossFit OC3 and Lizz’s sister stopped the low carb madness.

TNT is a jumpstart to a lifestyle change. It’s not a sprint that allows you to fall right back into your old ways. It’s a friendly competition that is there to better yourself and the gym community as a whole. Take it from swolemates Lizz and Murph, you can’t outwork a bad diet!!