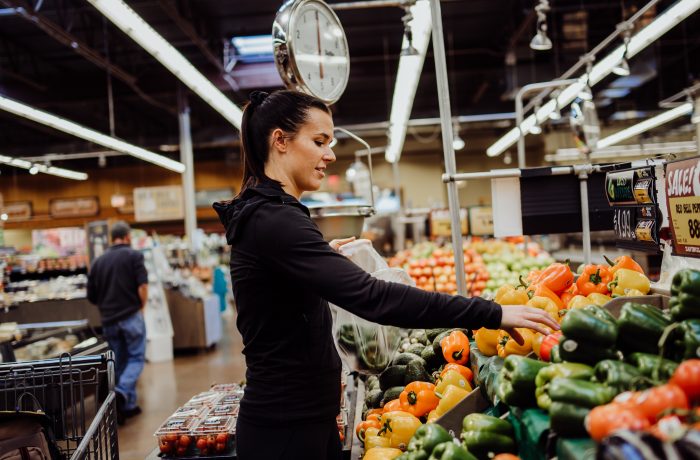 As a collegiate level track runner, Alli had no interest in CrossFit at all. She had friends who invited her to try it on many occasions but her kinesiology professors warned her of disorganization, injuries and other risks. So, she ruled it out without giving it a second thought.

Instead, she got into long distance running, powerlifting and strength training but just couldn’t get and stay motivated. She eventually slacked off and gained weight once the track season was over.

Just the opposite happened, though, when she first enrolled at the University of Wisconsin as a freshman. Wanting to change the way she looked and felt for as long as she could remember, Alli actually lost 15 pounds instead of gaining the “Freshman 15.” The problem was, she didn’t do it in the healthiest way. She became overly conscious about eating, almost to the point where it began to rule her life. Alli developed a food obsession. 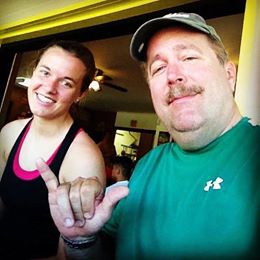 Alli grew up a part of a tight-knit, four-person family in Lakeville, MN. During times when it was rare to sit down to eat, let alone to sit down and eat together, Alli has fond memories of her favorite family tradition. “If you weren’t home by 6 for dinner, you knew you were in trouble,” she reminisced. But it wasn’t a chore for she and her sisters to make this family commitment, as it was something they all enjoyed. 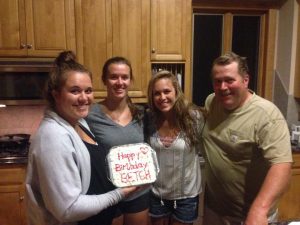 It was her dad who introduced her to the finer foods in life, and food in general. He equally enjoyed caviar and a fine bourbon as much as a good pizza. He cooked dinner every night which is when Alli learned a lot about food prepping, cooking and poor health, unfortunately. “He taught me to eat luxuriously and appreciate things like foie gras on baguettes with truffle oil but I later found my own way to health. I’m still grateful to him for the appreciation of gourmet, extravagant food, though!” 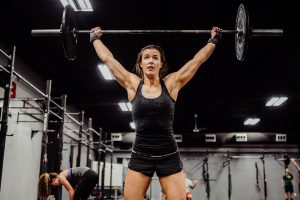 Before finding her way to food health, she wanted to get her exercise habits in check. That’s when she finally gave in and found a CrossFit gym in Davenport. Being a thorough and mindful person, Alli Googled nearby boxes and visited them all before making a decision. She chose CrossFit OC3, not just because it was the nicest facility she’d seen but because she was instantly welcomed upon stepping foot in the door. As far as overcoming any pricing concerns, “I knew CrossFit would be expensive but I would use that to be a motivating factor. I committed 100% to it so as not to waste a single penny.”

After attempting the regular gym route, she knew she needed the external team motivation and coaching to be held accountable. “We are well aware that the hardest part of CrossFit is just showing up, so we make a concerted effort to greet everyone who braves the unknown and walks in here,” said co-owners Colin Cartee and Kolton O’Day. 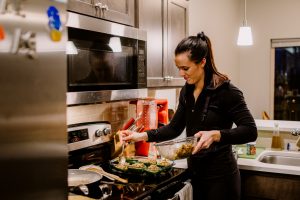 Food and nutrition aren’t always one in the same. Alli knew she didn’t want to risk falling back into extreme eating habits, so, this time, she would do it the right way. “I’m a big advocate for taking on one thing at a time!” Alli said. “Once I got into the habit of regular gym attendance, I noticed I was limited by the extra weight I was carrying around (both physically and mentally). That’s when I started rethinking my food choices. If I was going to do pull-ups and handstand push-ups, I needed to ditch the extra weight.” 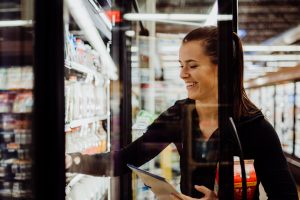 Once she felt her new fitness plan was ingrained into her daily life, she then sought the help of our in-house nutritionist to rethink her food habits. She signed up for three months and got started immediately. She’d always prepared a lot of her own food, thanks to her dad, but now she wanted to hone in on the healthiest foods and macronutrient combinations for her needs. She recognized that this would be another worthwhile investment in herself because she would give it 100%, just like she did with CrossFit. 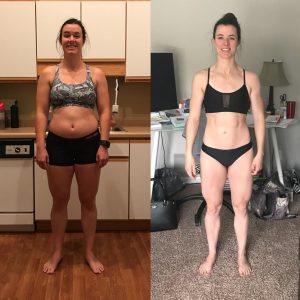 At about six weeks, she struggled to feel like she was getting anywhere so she reached out to her nutritionist and received side-by-side photos from day one to current-day. The difference was noticeable, to say the least! When it was all said and done, she lost 40 pounds in 12 months; she didn’t know she had 40 pounds to lose, so this came as quite a surprise! But what she gained, as we’ve uncovered with so many others before, was priceless. Besides helping her cope with emotionally challenging times, she was feeling better in general. The weight loss was great but the other benefits far outweighed that. “It was nice to be able to look in the mirror and feel good about how I looked – no more rolls hanging over my spandex – but even that is no comparison for the mental health and sanity I gained!”

THE THING THAT WAS OUT OF ALLI’S CONTROL 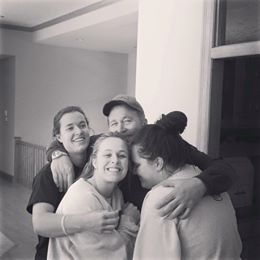 It was when Alli’s dad was diagnosed with prostate cancer – and the feeling that it was due to his unhealthy eating habits – that she made the decision to alter her own eating habits and quality of life. That part, she could control.

But, shortly after she moved to the Quad Cities, her dad’s illness had taken a turn for the worse. The emotions got to her and she found herself stress-eating just to cope with the pending loss of the man she looked up to the most. “I realized I was eating for feelings not hunger,” she said. It led me to want to understand that people have the power to improve their own health and that we are less likely to develop autoimmune diseases and even cancer if we alter our choices. And, you don’t have to be an elite athlete to do it. That’s exciting!”

It was during this time that coming to the gym every day became Alli’s sanctuary. It didn’t matter what 14-minute AMRAP Coach Colin concocted, the stress wasn’t weighing on her for those 14 minutes. It gave her structure and it kept her sane. She said, “It’s been so beneficial to have this as part of my life while simultaneously dealing with the pain and darkness of losing someone I loved so much. Without a doubt, that hour is ALWAYS the best part of my day and 100% what’s kept me sane through it all. I cannot thank this gym enough.” 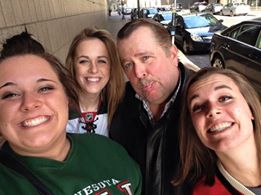 Dave Edmunds, a simple but indulgent man who was passionate about enjoying his life, family, and friends and who loved his girls immensely, passed away on June 14th, 2017, just four days after his 57th birthday. “His health suffered immensely but he lived totally and completely,” she said. For that, Alli is grateful.

ALLI’S ADVICE TO YOU

This young-but-wise, old soul’s advice for anyone reading is below. Her focus remains on factors that are within her control!

“So many of us want that instant fix but you have to spend the time and put in the work. It doesn’t have to be complicated or hard work, but does have to be a commitment. And you don’t have to give up ice cream and cookies, just eat your cheats in moderation,” said Alli.

Needless to say, she’s dreading the day she has to leave the Quad Cities and her favorite CrossFit gym once it’s time to move back home to be near family again. We feel the same, Alli! Thanks for sharing your courageous story!

Prostate cancer is the second most common cancer in men worldwide. The Movember Foundation is working to halve the number of deaths from prostate cancer by 2030. To contribute to the Dave Edmunds Movember fund for prostate cancer research, click here.

4 pull ups/RR add 4 each round