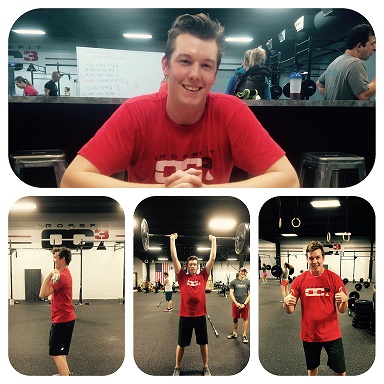 Many of you know Pete Schillaci. But do you know his little brother, Steve? Team OC3 does and we are pretty excited to tell you about him!

You wouldn’t know he’s new. Steve’s heart is fully in it, his movements are looking good and he’s here to stay. We’ve noticed his power cleans and kettlebell swings are strong. His tenacity is stronger.

BIT BY THE CROSSFIT BUG

Steve was our first signup, so it only makes sense that he’d be our first member hotspot! If we could frame him and put him on the wall to display proudly, we would. New to CrossFit, and new to any gym. Not new to the rush. Previously a snowboarder and motocrosser, he thinks of himself as a daredevil. We think he’ll fit right in! He’s been challenging himself in ways he didn’t know were possible. And he loves it! Not even two months in and he says, “I already love CrossFit and won’t ever stop.” It has given him energy to get through his long days as a new coffee shop owner. Between the coffee and the CrossFit, his adrenaline should be all set!

WHAT WAS HIS MOTIVATION TO START CROSSFIT?

Plain and simple. He wanted to get healthy and make a lifestyle change for the better. He didn’t like the weight he had put on or how he felt. And he craved something new.

WHAT WOULD HE DO IF HE WON THE LOTTERY?

Steve was a smoker. It took one week at the gym for him to give it up. Forever. We checked and his girlfriend, also new to the OC3 family, and brother are pretty happy about that. Quitting cold turkey, the first three weeks into being smoke-free were absolutely brutal but he quickly realized that smoking and metcons just can’t be friends!

An overhaul in the kitchen (not a remodel, but cleaning up his diet). He’s in it to win it!

CrossFit OC3 is excited to continue coaching Steve and we wish him continued success in everything he does!