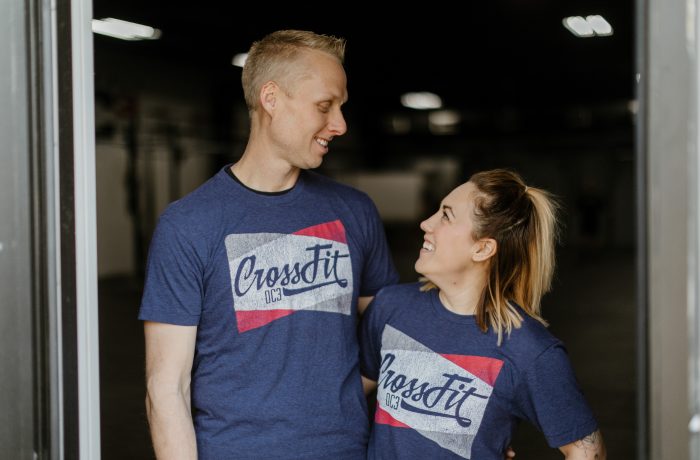 Both raised on the SAD diet (Standard American Diet), Chad and Marisa Mansfield had neither working out nor healthy eating on their radars. Now, they are the epitome of living healthy lifestyles and an inspiration to their family and friends!

At nearly 300 pounds, Chad, a mortgage officer at IHMVCU, was first inspired to get moving by his boss (an ultra-marathon runner) and a coworker (a CrossFitter). His first step was to buy an elliptical machine. He worked out religiously every night for 45 minutes to an hour and lost 70 pounds!

Marisa, a mental health therapist, wanted to be supportive of her husband. She’d also had a baby one year prior so she knew she needed a push, too. Their next move was buying a treadmill and, together, they started training for their first 5K. They trained for one full year for their first race. Marisa ran a 13.5-minute mile and says, “It wasn’t glorious but we finished.” From there, they signed up for as many races as they could between March and October.

After a few years, they got bored with their elliptical and treadmill routine and looked into CrossFit. They eventually found OC3’s annual 21 days for $21 promo in August of 2018 and took the leap! Chad lost another 30 pounds after joining CrossFit and Marisa is proud of his progress. When she looks back at old pictures, she not only sees an unhealthy version of her husband but an unhappy one. She talks of the mood boost and how cranky she feels without her morning workout. They even have a full gym in their garage now but, of course, it’s just not the same as coming to their respective CrossFit classes! There’s a ton of accountability and solidarity in the CrossFit community.

Incorporating weights into their fitness routine has made all the difference. Chad is down 100 pounds in total. Marisa has noticed that the back pain she used to feel when lifting her kids is gone. Now, they can both wrestle with their kids on the floor and jobs around the house, such as digging out shrubs, are easier when able-bodied.

Incorporating Nutrition, Because You Can’t Outwork a Poor Diet

This year was their second go-round with our annual TNT – Total Nutrition Takeover – program/competition. Marisa says she gained 16 pounds during the COVID shutdown, not for lack of working out but not making the best food choices while home with kids. “I was looking forward to TNT after lockdown!” Marisa said. They followed their macros and other markers such as plentiful sleep and workouts to a T with no cheats. Chad enjoys tackling health and fitness with his spouse, “She pushes me!”

It was recently that Marisa had this awakening around food. She figured out that you can’t outwork a poor diet so she found healthy recipes that actually taste good. She fully enjoys meal prepping now whereas she didn’t spend much time on it before. She is working around her very picky husband’s palate but some of their family favorites are blackened shrimp tacos, blackened chicken salad and chicken tacos.

Their post-TNT plans are to not let unhealthy food back in the house, which means enjoying occasional treats – such as Lopiez pizza – outside of the home. This is a good strategy for avoiding going back to their old ways, they feel. They want to maintain this as their new lifestyle rather than thinking of it as a diet.

They are grateful to their cOaCh3s and especially Colin Cartee, Owner-Operator, “He might not know that he cares but he cares!!” Marisa so accurately said.

While they don’t get to work out together often due to having children (they divide and conquer), they do enjoy the camaraderie of doing the same activity. They both look forward to the next day’s workout when Colin posts it the night before around 7 pm. They have more mutual friends now and both feel community is everything!