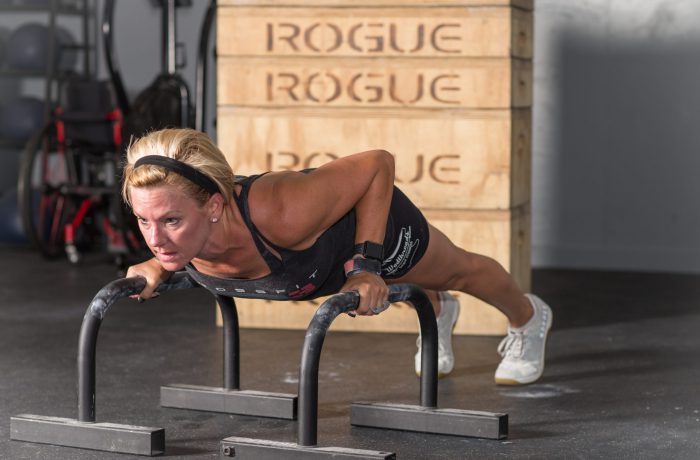 Growing up, Bobette was very active and never had weight issues. In fact, she was sometimes considered excessively small or underweight. Gymnastics and softball ate up a lot of her free time but she eventually became a mom and inadvertently less active as she balanced family life with her nursing career. Still though, no real weight concerns, until…

It wasn’t until baby number three at the age of 39 that she realized just how important both eating right and staying in shape were. Not only that, but she was also battling with post-partum depression, so her attentive husband took notice and wanted to help. He signed Bobette up for a membership and a trainer at Gold’s Gym. To boot, he worked out with her for the first couple of months which was all it took for her to get back into the swing and make fitness part of her normal routine. But, something was still missing.

She Thought CrossFit Was a Cult

Bobette was getting what she thought were decent workouts but she kept hearing about CrossFit. One of her good friends, Dr. Tuvi Mendel, tried many times to recruit her but she wasn’t having it. After Gold’s closed, she caved and gave “CultFit” a try! To say the least, it was a very humbling experience for her but it took only one week to be hooked and drink the Koolaid. Until that point, she hadn’t realized what was missing.

It didn’t take long to see physical changes in her physique which came as a surprise since she’d worked so hard with her personal trainer previously. She wasn’t looking to set any personal records (PRs) or do anything outlandish but was very pleasantly surprised with her early results. Again, there was still more to the story as working out is only part of a healthy lifestyle.

Dieting is a bad word in Bobette’s book. Maybe because she tried a few before landing on what makes the most sense for her and produces the best results. First, it was the Paleo diet, then it was macros with a nutritionist; both were way too restrictive for her taste. With Paleo eating (high in protein and fat), she had minimal energy due to low carbs. With the nutritionist, it was counting macros in a restrictive way that felt too much like a diet. She says, “I fully believe in counting macros but it wasn’t until I could make it my own that this way of eating began working for me.”

In 2019, Bobette did her first TNT challenge – Total Nutrition Takeover – at CrossFit OC3 where she paired up with Nic Johnston as her health coach. This is when she learned that she could eat whatever she wanted (there are no “no foods,” which is why it’s not considered a diet) but there are limits. You have to be able to fit whatever you eat that day into your three macros (carbs, protein and fat), which are personalized to you. He taught her that you get out what you put in, therefore, you make it your own. You own it!

Bobette has done so well with her new way of eating that she certainly doesn’t miss her Paleo days of low energy and having trouble going out to eat. She says, I’m not trying to be a CrossFit Games athlete but I want to live a long, healthy life with my family.”

UPDATE: Bobette just finished her second TNT with her daughter, Alex, and both look and feel incredible! Bobette was a finalist and absolutely crushed it!

Then she ran into yet another setback…

She is Recovering from Surgery at 47

As a young girl in gymnastics, Bobette injured her hip. What she suspects was a very minor injury that sat dormant for years was now being thrown back into a workout regimen, which only exacerbated it. She also noticed pain while sitting for long periods of time at her desk job (from nurse to admin) or during any weighted squats. The MRI confirmed it, she had a torn labrum in her hip. Hers was a cam impingement, which occurs because the ball-shaped end of the femur (femoral head) is not perfectly round. This interferes with the femoral head’s ability to move smoothly within the hip socket. Essentially, her surgeon needed to repair the labrum in her hip and shave down some of the bone.

Post-surgery, she’d spend four weeks on crutches and would be limited to no more than 20 pounds weight bearing on her right leg. No running or weight lifting for four months. She stuck to her macros during this time but reduced her calorie intake since she wasn’t burning anywhere near the same amount of calories anymore.

Bobette’s surgery was in August of 2019 and, as of the first week of December, she was released back to the gym for limited workouts. Her range of motion wasn’t where she wanted it to be so she took it slow and worked with her Physical therapist, Coach Joe P. Coaches Colin and Nic have also helped her scale workouts while still getting a decent workout in.

She’s now squatting 155 pounds! February 21st was her 6 months post-surgery mark and she’s hoping to be able to run again very soon (6-9 months is the projection).

Her speedy recovery at 47 can be attributed to having a great surgeon and PT but also the years of work she put in to stay in great shape and eat right! Bobette, who runs the University of Iowa Orthopedics Department, has seen it all. Knee replacements due to carrying excessive weight are not uncommon in her world. But her mother, who at 73 is still her role model, stays active and busy. Bobette wants to keep playing soccer with her 8-year-old into the future and believes wholeheartedly that activity is the key to longevity.

This OG CrossFitter is unstoppable and we’re so lucky to have her in the OC3 family. Congratulations, Bobette, on all of your success due to your hard work and determination!