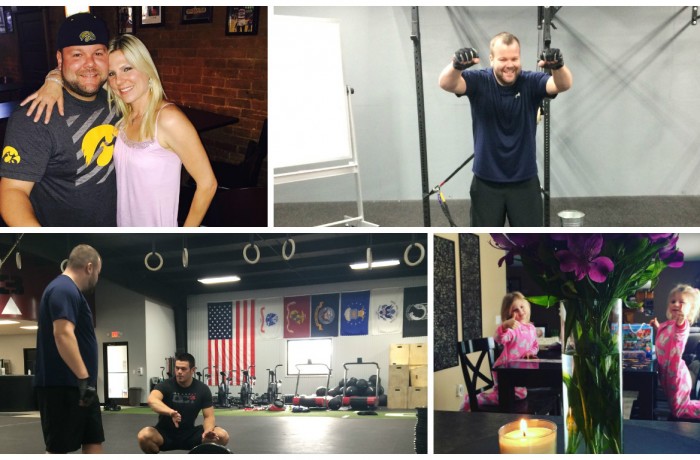 Tacos are a universal motivator. And that fact is universally acceptable. So the fact that Matt Erickson loves tacos could only mean that he is a motivated CrossFitter.

Matt came to OC3 because it was time for change. He was low on energy and he had some goals he wanted to achieve. He’d heard of the new gym opening and knew Colin Cartee; Matt was ready to give CrossFit another try. It had been a few years and the regular gym just wasn’t working out. He was losing motivation fast and knew exactly how to fix it.

When he walked in to OC3, he thought it looked like an NFL training facility. Everything was well taken care of, organized and clean. Just really nice, he thought. And, the timing was right. His two young kids were old enough to bring along now and his drive to get and stay healthy had returned.

Matt joined us in October when we first opened. He admits wasn’t fully committed yet. Attendance was a bit hit and miss for him. Then, the Filthy Fifty* showed up in our programming in December and he didn’t finish the workout. It was in that moment that he thought about walking away for good until he remembered a time when his favorite coach ran with him during a tough workout, “I love Colin. He pushes me harder than anyone out there.” The support he got during that 400 meter run stuck with him. Even more than the refried beans in his favorite Mexican food.

When the holidays passed he the new year rolled around, Matt came back with a vengeance. He’d had enough. He hadn’t been giving it his all and he knew it. He and Colin had an honest chat about why he wasn’t progressing at the rate he wanted. Colin explained that the type of strength and gains he wanted wouldn’t happen while he was carrying the weight in his abdomen. His back would likely suffer, too.

Matt took this advice and tough love to heart and set out once more to accomplish the goals he’d set three months prior:

Sometimes, it’s the unexpected outcomes that really impact us. Matt has found that being in shape and losing some of that stubborn belly fat has led to more energy and better posture at work. “I travel a lot and I find myself sitting up straighter in the car and not feeling as stiff by the end of a long drive,” said Matt, a field service engineer for pharmaceutical robots. “I work on machines which requires lifting, bending and kneeling. CrossFit has helped with my strength and stamina.” Not only that, Matt is a bowler (fun fact: with  five lifetime perfect 300s); he’s noticed the power from his core in bowling and his other activities such as playing with his kiddos, softball and golf.

It’s obvious he’s on a mission but what we’re uncertain about is whether that mission will involve both tacos and pull-ups. He’s been in the gym nearly seven days a week the past few weeks and he’s completed some of his very first Rx (as prescribed) workouts. His wife and kids can tell a difference, too. To celebrate, they are making him a special dinner…homemade Mexican food!